One of the things that I didn’t start to experiment with until later on in my vegan ‘journey’ was substitutes for animal products. I was quite content with cooking plants that tasted like plants, until Remi started talking about cravings for eggs or cheese. Mission accepted!

A frittata may not seem like the most obvious place to start- it’s certainly no bacon butty or cheesy pizza. However, it is simple, healthy, and hits that hearty breakfast spot. A fluffy, eggy base meets fried mushrooms (nothing says breakfast like fried mushrooms) and fresh cherry tomatoes. Try it with my sauteed garlicky kale and sliced avocado for a great lazy weekend breakfast.

How to make this vegan frittata taste great

The key to making this vegan frittata taste great is seasoning the batter. The main components of the batter are aquafaba (chickpea water), tofu, and chickpea flour. Alone, these ingredients don’t have a huge amount of flavour, but make a great base for the consistency of the frittata. I’ve added turmeric, garlic powder, onion powder, and dijon mustard alongside the trusty grind of black pepper. You can add whatever herbs and spices you like here, but I find this to be a great combination for a delicate taste. My other secret ingredient is kala namak, also known as black salt, for that important eggy flavour.

What is kala namak?

Kala namak, or black salt, is a kiln fired rock salt. By firing it in a kiln, a chemical reaction is created, in which some of the naturally occuring sodium sulphate is transformed into hydrogen sulfide. Higher levels of hydrogen sulfide give black salt its distinctive ‘eggy’ smell and flavour, which makes it a great ingredient for egg replacements. As it is a salt, the eggy flavour also comes with saltiness, so you need to be careful about the amount used!

How to make the batter

The most important part of the frittata making process is the whipping up of the aquafaba. For this, drain 2 cans of chickpeas, keeping the chickpea water. Put the chickpeas in the fridge as these are a great versatile ingredient to use in a different recipe later- they’ll keep in an airtight container in the fridge for 4 days.

I have a whipping attachment on my food processor which is great for the job of whipping the aquafaba, but if you don’t, there are a few other options:

All in all, the main goal here is getting the aquafaba to roughly double in volume. Once it has, put it to one side in a large mixing bowl.

Next, you need to mix the rest of the batter ingredients. I use a food processor for this, but if you don’t have one, I suggest blending the silken tofu using whatever means you have (blender, nutribullet, potato masher) until completely smooth, then gradually stirring in the dry ingredients. The end goal is to have a thick, smooth mixture.

Gently fold the flour mixture into the aquafaba, and the batter is ready.

How to make the vegetable frittata

The next part is simple. Fry the onion and mushroom in a pan or skillet over a medium heat. Once the mushrooms have stopped releasing water and the juices have cooked off, add spinach and wilt for 2 minutes. It’s really important that this is kept over a high heat until all of the water has evaporated, as water will make your frittata soggy. Just keep stirring them around the pan until they are dry.

Pour in the batter and mix well so the vegetables are distributed. Transfer to an ovenproof dish, top with sliced tomatoes, and bake in the preheated oven for 45 minutes or until a fork placed in the centre comes out dry. (If your pan or skillet is oven proof, you can skip the transfer step. After adding the batter, keep it on the heat until the edges are cooked, add tomatoes, then transfer to the oven for 35 minutes.)

How to store this vegan frittata

The cooked version of this frittata keeps in the fridge for up to 2 days, but is best on the day it’s made. After the first day, the outer will turn from crispy to soft. It’s still delicious, just without the crunchy exterior. The frittata mix keeps well in the fridge after mixing, so try making this the night before and mixing with the veg to bake in the morning.

Why not try my silken tofu scramble, or maybe a stack of delicious vegan banana pancakes? 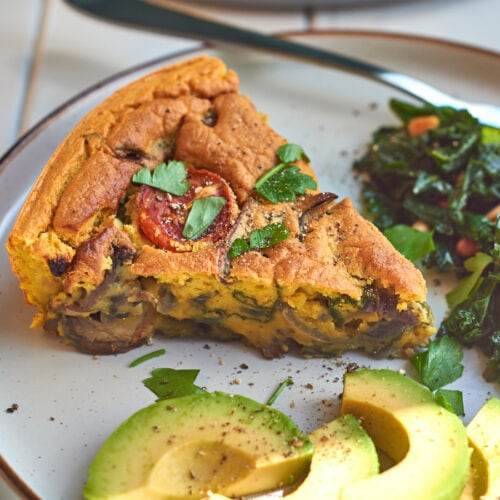 *It is really important that all of the liquid evaporates here! If you don’t, the water released whilst in the oven will sink, and the frittata will be soggy on the bottom! **Use leftover chickpeas in my Moroccan Tagine recipe!
Share
Pin
Tweet
Share
Vegan Moroccan Tagine with Chickpeas
Vegan Pasta Salad with Mediterranean Vegetables

Welcome to Forkful of Plants! 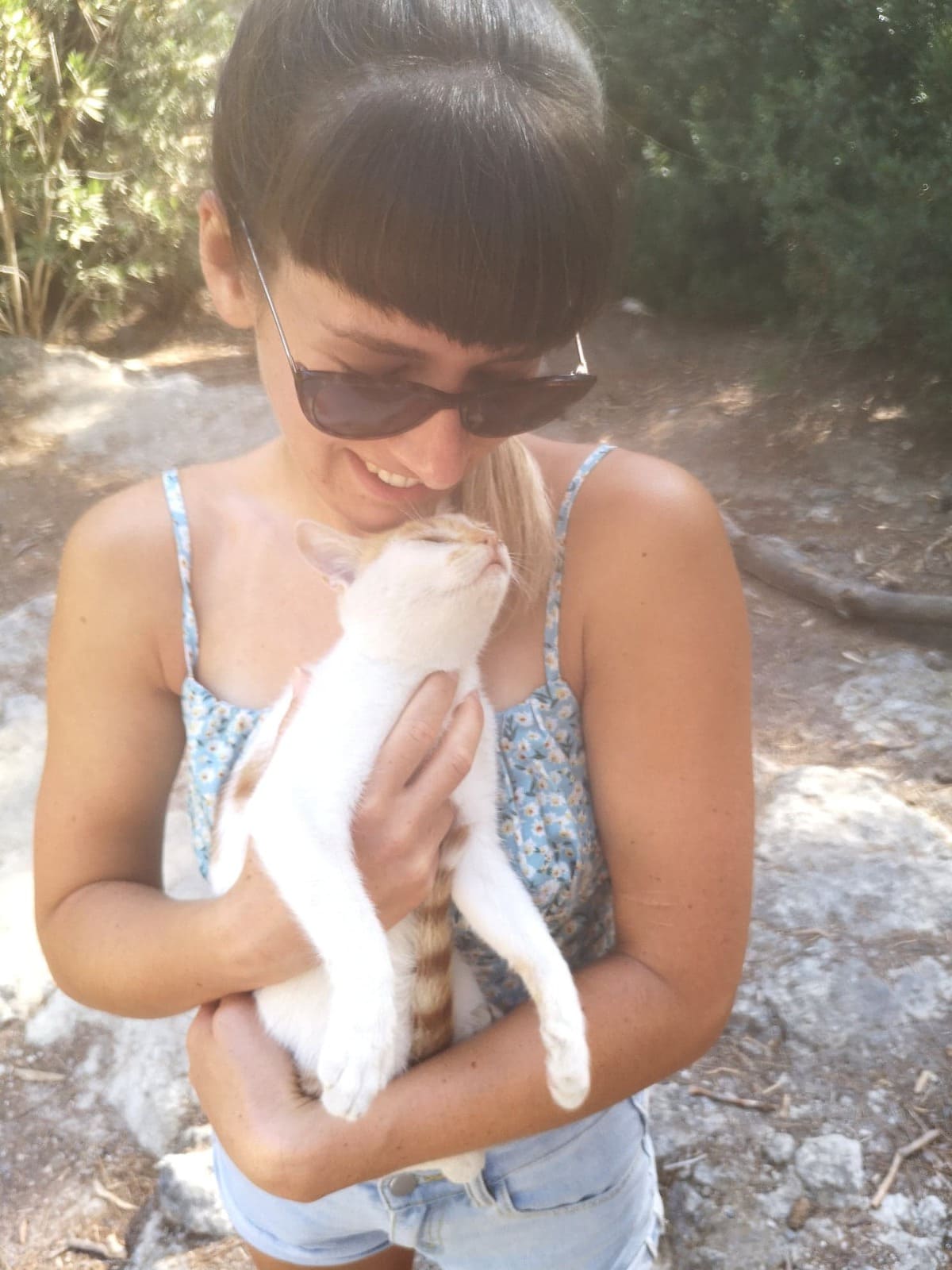 Hi! Welcome to Forkful of Plants. I’m Chloe, a vegan food-obsessed cat lover. This blog was born out of finding limited time in the week to cook the food I love. I started making the most out of cooking at the weekends, allowing myself to be prepared without sacrificing my love for great food. My partner Remi, badgered me to document my recipes for other vegans, vegetarians and flexitarians who want to cook to a schedule that suits them. And that’s how Forkful of Plants was born- the place to go for delicious plant-based recipes every day of the week!

Searching is in progress

Find me on social media